Fright in the Box

Fright in the Box is an animatronic sold by Spirit Halloween for the 2020 Halloween season. It resembles a large red, black, and brown jack-in-the-box with various skull designs and a large hand crank. Upon activation, the hand crank on the box begins to turn as a music box version of the song "Pop goes the weasel" can be heard. As the hand crank comes to a sudden stop, a green-haired clown with a large bowtie rapidly pops up out of the box while its eyes light up yellow and laugher plays, the animatronic then goes back into its deactivated position while the laughter is played.

"After the toymaker's wife died, nothing made him happy. Making trains and dolls was no relief. One day, a man from the traveling circus visited him and promised to cure all of his pain and make him laugh again if he made him one particular toy. Desperate for his melancholy to cease, the toymaker agreed. Now, no one has seen him since, but locals say behind the clown's twisted face they can see the toymaker's eyes when the Fright in the Box strikes."

"The Fright in the Box animatronic features yellow glowing eyes, and his head pops up when you least expect it for a terrifying scare." 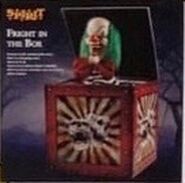 Closeup of box in teaser

Shown in promotional email
Add a photo to this gallery

Retrieved from "https://spirit-halloween.fandom.com/wiki/Fright_in_the_Box?oldid=77157"
Community content is available under CC-BY-SA unless otherwise noted.