Krampus is an animatronic sold by Spirit Halloween for the 2020 Halloween season. It is a replica of the character Krampus, from the 2015 film of the same name. Upon activation, the animatronic turns from side to side as its eyes light up yellow while howling, rattling chains, jingle bells, and music can be heard.

"This half-goat, half-demon is here to keep an eye on the behavior of all who celebrate. Watch your back because Krampus is always watching. Should you decide to misbehave, you may be in for a punishment!"

"This life-sized Krampus animatronic features light-up eyes, howling sounds, and moves from side to side for a scare that is unlike the rest." 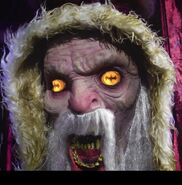 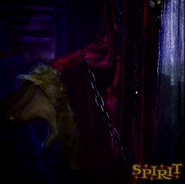 Seen in teaser
Add a photo to this gallery

Retrieved from "https://spirit-halloween.fandom.com/wiki/Krampus?oldid=79573"
Community content is available under CC-BY-SA unless otherwise noted.