Not to be confused with the 2011 static animatronic 6 Foot Standing Scream Ghostface.

The Life-Sized Ghostface was an animatronic sold by Spirit Halloween for the 2011 Halloween season, a replica from the movie, Scream 4. When activated, the head and torso turned, as the eyes light-up and arm moves to movie dialogues.

"Woodsboro will never be the same and neither will your neighborhood - the life-sized  Scream Ghostface animatronic prop will taunt and terrorize all who pass. The motion-activated serial slasher brandishes a bloody hunting knife and utters six menacing sayings. Over six feet tall, the killer is dressed in a hooded black robe and has posable arms - place him in your home to startle guests, greet trick or treaters or create mayhem. Whatever you do, keep Ghostface away from the telephone."

Setup in House of Horrors (2011) display

Side view setup in House of Horrors (2011) display 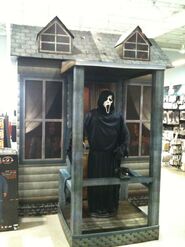 Tabletop version
Add a photo to this gallery

Retrieved from "https://spirit-halloween.fandom.com/wiki/Life-Sized_Ghostface?oldid=80250"
Community content is available under CC-BY-SA unless otherwise noted.