The Peek-A-Boo Clown is an animatronic sold by Spirit Halloween for the 2020 Halloween season. The animatronic resembles a blue-haired clown with missing teeth wearing green clothing with blue polka-dots and orange shoes, covering its eyes with its hands. When activated, the animatronic reveals swirling eyes in multiple colors, moving up from a hunched position as its hands pull back away from its eyes and it says one of four different spooky phrases. This animatronic was teased in the "Something Terrifying is Coming" teaser and its eyes were seen in the thumbnail of the "Watch out" teaser video.

"No one knows his real name or what circus brought him to town. Some stories say he got those ghastly scars from the Strongman after playing peek-a-boo with his wife. When the sun dips low, you can find him standing outside the grocery store, car dealership, or liquor store begging for a game of hide and seek. It's usually harmless . . . unless he catches you!"

"This Peek-A-Boo Animatronic begins in a hunched over position hiding his face before making creepy sounds and opening his arms to stand upright and reveal his terrifying eyes."

Prototype seen in the backroom of The Flagship Store 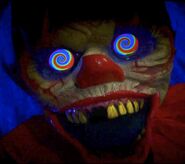 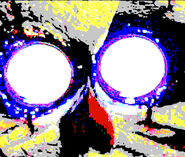 Seen in the teaser

Seen in the teaser
Add a photo to this gallery

Retrieved from "https://spirit-halloween.fandom.com/wiki/Peek-A-Boo_Clown?oldid=80269"
Community content is available under CC-BY-SA unless otherwise noted.