The Reaper's Island Cave, related to Reaper's Island Village, is one of the two themes created by Spirit Halloween for the 2020 Halloween season. It resembles a stone-like structure with many columns, skulls, crates, and a large skull at the top. 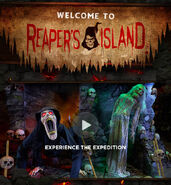 Left side of the display, where Mommy's Favorite would be

Right side of the display, where Angeline would be

Price sheet
Add a photo to this gallery

Retrieved from "https://spirit-halloween.fandom.com/wiki/Reaper%27s_Island_Cave?oldid=79176"
Community content is available under CC-BY-SA unless otherwise noted.