Resurrection Mary was an animatronic sold by Spirit Halloween for the 2010 Halloween season. It resembled an undead woman with black hair, blank eyes, and in a black dress behind a tombstone. When activated, it would lunge up, causing the tombstone to knock-over, revealing the figure. When in the up-position, the head begun to spin, as screaming and music could be heard.

"Some folks just don't know when the party's over - Resurrection Mary won't leave, ever! Turn heads when, at the slightest sound, this animated prop pushes down her tombstone to rise up - her head starts to glow and spin in a horrifying reminder that there is an afterlife and it's coming to get you. Over two feet tall!" 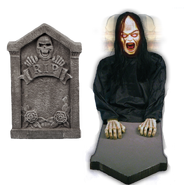 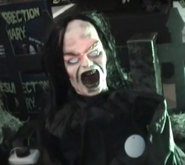 Laying down position side view 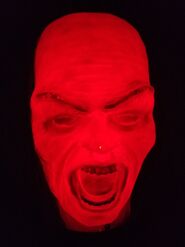 Behind view
Add a photo to this gallery

Retrieved from "https://spirit-halloween.fandom.com/wiki/Resurrection_Mary?oldid=72704"
Community content is available under CC-BY-SA unless otherwise noted.