Spirit Halloween Exclusive
Uncle Charlie (2020) was an animatronic sold by Spirit Halloween for the 2020 Halloween season. It resembled an old, red-haired clown wearing an orange hat with a red sash, a red bow tie with yellow polka dots, a yellow plaid shirt with a white flower in the lapel, black pants, and red clown shoes. He is holding a colorful lollipop and a bucket that reads, "Free Candy." When activated, Uncle Charlie's head turns back and forth as his mouth moves, his eyes light up yellow, and he speaks one of several different phrases.

“Step right up; step right up! The world's most mischievous clown is back! After a long time stuck touring the sideshow circuit, Uncle Charlie has finally returned to the big top with enough candy for anyone who loves a good scare. Don't worry, though, his routine is still killing it – literally.

This 10 year anniversary re-launch is every fan’s dream! Uncle Charlie has light-up eyes and a moving mouth. His head turns from side to side, as creepy sounds surround his terrifying appearance." 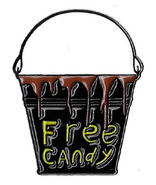 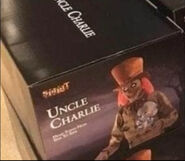 Bucket seen in teaser
Add a photo to this gallery

Retrieved from "https://spirit-halloween.fandom.com/wiki/Uncle_Charlie_(2020)?oldid=98222"
Community content is available under CC-BY-SA unless otherwise noted.