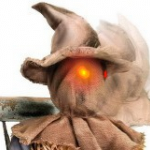 Branimatronic2 is an administrator on this wiki.

I like Halloween, and I consider myself a 'serious decorator' for the holiday (far from professional though). More of an exterior, lawn and garden type decorator, I have been constructing large displays on the front lawn of my home for the various major holidays for over 9 years. My largest setups are at halloween; though I also decorate for Christmas, easter, Independence Day and the other big ones as aforementioned.

I have been collecting halloween decorations since I was but a young child, but only really began collecting Animatronics in 2017. Subsequently, 2017 was my first time ever visiting a Spirit Halloween store, however I followed the retailer online since 2016. My collection is rather small compared to other collectors, mainly because of a tight budget, but altogether I have amassed over 100 animated tabletop decorations for Halloween, Christmas, Valentines, Easter, the Fourth of July and non-seasonal items. Because of this tight budget, and little room in my house to display much, I currently own no lifesize decorations, however I do have a few three foot tall figures.

My outdoor halloween display is considerably large despite my rather small front yard. It wraps around my house, and while the main setting is a graveyard, certain parts are divided into small sections comprised of several of the same type of props, for example a skeleton section, a witch section, a pumpkin patch etc. It is mostly comprised of light up ground breakers, blow molds and inflatables; I occasionally set out animatronics, however I am notoriously paranoid about them getting damaged or stolen if left outside, so I often randomly place them out and when I do, they are secured to the best of my ability. During light rain, they are covered with plastic and in heavy storms they are taken inside entirely. Honestly, I am extremely protective of all my outdoor decorations and I have all of them secured very well due to theft and vandalism being a common threat in my area of northern New Jersey. Setup of my display, including prop securing and electrical configuration, usually takes a couple days to assemble, and a few weeks to perfect, as I usually move things around and adjust their positions on the yard over the season.

(This is so shameful)

My Zombie Arm Pathway Markers
Add a photo to this gallery

Retrieved from "https://spirit-halloween.fandom.com/wiki/User:Branimatronic2?oldid=77630"
Community content is available under CC-BY-SA unless otherwise noted.