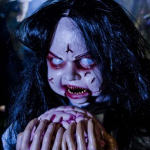 Mr.HalloweenHaunter1 is an administrator on this wiki.

Ever since I was a kid, I've always had a passion for collecting animated Halloween figures. I remember starting my collection in 2006 and since then my collection has grown immensely. Since 2012, I would document my own experiences to different Halloween stores as before my parents would. I didn't start a YouTube channel until September of 2015 to become apart of this Halloween community as I was fascinated by others out there having an interest in this holiday. I've met some awesome people along the way and I'm very happy I can talk to many people about Halloween.

If you love Halloween as much as I do, I recommend subscribing to my channel! https://www.youtube.com/mrhalloweenhaunter

Rising From The Grave Zombie

Evil Scientist (No Longer Own)

Retrieved from "https://spirit-halloween.fandom.com/wiki/User:Mr.HalloweenHaunter1?oldid=79437"
Community content is available under CC-BY-SA unless otherwise noted.